(Kansas City, MO) – After more than a year, Woodswether and Santa Fe intersection in the West Bottoms is open. KC Water rebuilt a 120-inch combined sewer and replaced other stormwater lines, sanitary sewers, and water lines after a sinkhole occurred which collapsed the intersection near 1200 Woodswether Rd. on June 2, 2019.

The street collapse was a result of a partial failure of the 10-foot combined storm and sanitary sewer line due to sustained high levels of ground water related to the flood levels on the Missouri River.  The line, built in the early 1900’s, carries wastewater and extreme volumes of rain run-off to the Santa Fe Pump Station.  Without that line in service, KC Water had to temporarily pump wastewater flow around the station during reconstruction of the sewer.

“The work took some time due to the complexity and the numerous utilities that had to be rebuilt. We had to replace water, storm and sewer lines in addition to rebuilding concrete structures that contained the pipes. There were challenges, including prolonged high levels of groundwater and record rainfall that summer but thanks to the hard work of KC Water staff, our prime contractor (Leath & Sons), and the patience of the neighboring community we were able to get it done,” said Brent Herring, KC Water

The 120-inch sewer collapse was approximately 35-feet below the street resulting in a 90-foot long excavation. The collapse resulted in the potential failure or breach of several other utility lines including a water line and 36- and 66-inch storm lines. It also required temporary relocation of electrical, sewage and water utilities, a pure oxygen line, and electrical utility vaults. The work is complete and the road has been reconstructed and reopened. Below are a few pictures from beginning to end. 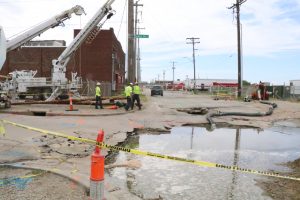 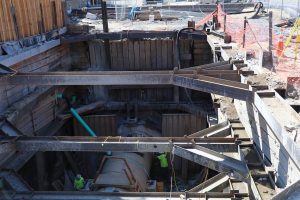 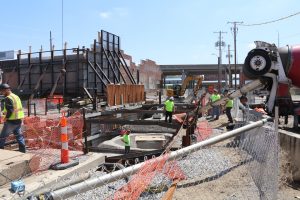 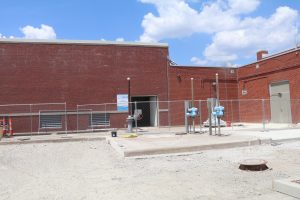 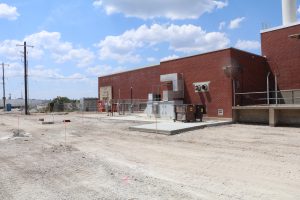 KC Water maintains and operates water treatment and distribution systems, stormwater management systems, and wastewater collection and treatment systems for residential and business customers in Kansas City and for wholesale customers in the Kansas City area.  KC Water is primarily funded by fees charged to customers based on their use or impacts on the three utility systems.